As every November we meet up for our annual Codevember and try to create a game, application or art project on a single weekend. This year the team was quite small and it took us more time than usual. However, we’re quite proud of the outcome. We proudly present this year’s project: Underwatch

Note: We also got a WebGL version if the versions from above doesn’t suit you.
Another note: If the performance is not that smooth, there is a quality option in the main menu
“It’s not called the ‘Dark Souls’ of shadow games for nothing”
Marius Krieger

This year it was fairly easy to find a topic we could all agreed on, since the team size was quite small: We wanted to create something in the field of light and shadow. The project itself should be a game and we decided to go with Unity, since we had the most experience with it.

As every year we noticed very fast, that our goals were quite big and that we have to focus with our scope. With the help of Mitja we quickly broke down the pitch idea into some basic game mechanics (which should be stacked with further progress), some basic storyline (we started with a robot breaking out of the warehouse) and some basic level design (restricted room which has a fixed light source in it and variable/moving and later on movable objects).

We spent quite some time setting up the initial project and clarifying the roles. However, we noticed that we had learned (the hard way) in the previous. years how not to do it. Therefore, we broke down the tasks and assigned it to the participating members. While I (Mat) was quite busy with the light detection feature, Benedikt built the core game manager, Patrick took care of the game state management (even if it was a little bit too complex for our case) and Mitja took care of the whole models we used as well as the menu. We quickly built something that we could work with and started improving our prototype. 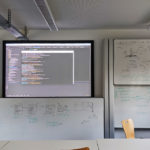 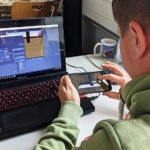 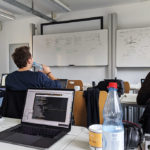 At the end of the weekend, we had a fairly stable prototype but we also developed a ton of new ideas regarding the project. We also changed the setting to a rat escaping a laboratory which also led to the discovery, that a smaller player character feels better concerning the light collision. However, there were a lot of not yet implemented ideas…

We basically had two options: Either finish the prototype and push it out or get going with the ideas in our heads – we decided to got with the second option as the potential of this game seemed huge. So Bene, Mitja and I proceeded with the development over a few months besides our main jobs – mostly some hours in the evening or on free weekends. It was a refreshing task and it was fun to work on something where you are actually project manager and developer in one person: You change a line of code and the whole game logic flips around. We had reached that point in December, where we realized it was worth to put more effort into this game: We had a nice story, coherent graphics and style, additional sound effects and a bunch of nice working game mechanics. Our internal deadline was the February 14, 2020 – we were quite close to finishing the game, but on the other hand there was a lot missing. So we went with the decision to postpone the release for a few more weeks. A friend of mine, Johannes Heidingsfelder, prepared some atmosphere sounds and sound effects for us, which we also wanted to implement.

So basically we finished everything, cleaned up a lot of code and game mechanics, smoothed the level design for better playability and adjusted the sound design to match up better to the levels. All in all we were ready to release and released first our Android version and (this year for the first time) the corresponding iOS game.

We are quite happy with the outcome and hope you’ll enjoy our game. If you got any questions or feedback regarding the game, other games or the Codevember project itself, just drop us a message 🙂

Note: Since this game is for free and this whole project is on a voluntary base, we would be happy if you could spread the word, drop us a rating and review or just enjoy our games with a smile!